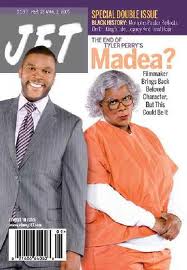 Is your life a Tyler Perry movie?

I get so tired of us (black people) bashing Tyler Perry saying this and that about his movies being coonery and misrepresenting the black community. I’d like to beg to differ.

First of all, movies and television shows are life exaggerated, please understand that people.

Second, as much as you like to think your life isn’t a Tyler Perry movie it is… and there’s nothing wrong with that. The only thing you’re probably missing is a Madea and that my friend is questionable.

…and you know what? There’s nothing wrong with that.  Atleast at the end of a Tyler Perry movie there is some form of a happy ending.

We spend so much time bashing the image Tyler Perry presents, but these depictions are true. We need to support him, whether it be by going to see his movies and shows or just not bad mouthing him because guess what?! White people are dysfunctional too and they make movies and shows about it then win prestigious awards for it.

Another issue I have is that we talk all this stuff about Tyler Perry, but when was the last time black people in droves went out to see a Spike Lee film and it became a box office hit in the theaters? There are children who are attending college that never saw School Daze or Mo’ Betta Blues or She’s Gotta Have It, but have seen every Tyler Perry movie.

We need to face reality and understand that his movies represent real life… but exaggerated. If you have a problem with TP’s films then you should have a problem with Jumping the Broom, The Best Man, The Wood, Waiting to Exhale, Nutty Professor… the list can go on and on and on. If this isn’t your life it is someone you know life. Just be real.

Black people have many varying life’s and representations and we can’t shun out the ones we don’t like instead we need to find the beauty in it because this is your life and the first step to changing it is to be real with yourself.

If don’t have anything good to say about TP, then don’t say anything at all because while you’re bashing him he’s laughing all the way to the bank.

Speak your peace in the comments sections.

Okay, I find this really ridiculous!

The fact that Disney’s The Lion King 3-D made $30.2 million in theaters this weekend. I think it may be just me because I don’t have a job (like many other Americans out there) to go see a movie that I ALREADY OWN on vhs and dvd. I love The Lion King, but why would I spend extra money on a movie I’ve seen thousands of times, in the comfort of my home at that? Just because it’s 3-D?! I think not.

I’m sorry, but 3-D hasn’t made me a believer yet. I don’t like it! It’s too much on my eyes with all the images. I’m leery of those glasses I have to wear as far as germs are concerned. Lastly, I don’t want anything all up in my face or flying toward it, even if it is fake. I almost forgot, it’s too damn expensive!! Most people who probably went to go see this are families- that had to have cost them a pretty penny for a family of four or more.

I’m not trying to knock Disney’s hustle (or anyone else for that matter), but this is straight up capitalism at its finest. They took a movie already made and many years old (16 to be exact) and just made it 3-D. This did very little to add jobs in this economy, but made millions of dollars off of the American people.

I can’t be completely upset with Disney because American consumers are idiots. We will buy into anything which is very evident with the weekend box office total of $30.2 millions that were made. We can be so frivolous  with our money (yes, I am included in that statement).  And we wonder why were in debt and in a recession. I digress…

With all that is going on in our economy I would much rather spend the extra money to see the live production over and over at a theater. At least, I know that many significant hands are needed for the overall production (i.e. actors, production staff, ushers, etc). There are talented people able to work because of a play. A spectrum of employees from minimum wage to college graduates. May I add that the play is culturally more sophisticated than a movie, especially this day and age.

Maybe if our economy was in better shape and our unemployment rate was lower I wouldn’t be so annoyed about The Lion King 3-D. The fact of the matter is that there is a bigger picture here that apparently people are missing.

I love Disney and The Lion King very much. I saw the movie in the theater as a child and watched it day in and day out once it was on vhs (man I feel old talking about vhs), but at the end of the day I think that its a waste of time and money to see it 3-D. Even if you have children who are under six years old. I’m sure the Disney vault will open again and allow you to purchase the movie on dvd for your children. Nonetheless, the book is available for you to read your children the wonderful story of Simba and his journey.

What are your thoughts on the release of The Lion King 3-D? Speak your mind.